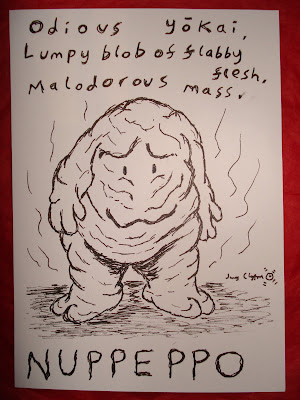 An extremely unusual and pretty unnerving yōkai from Japanese folklore, the Nuppeppo is a, basically, a supernatural blob of flesh. Most commonly characterised as being a genderless lump of flab no taller than a metre-and-a-half in height, a face and features such as fingers and toes may also be attributed as anatomical features amindst the folds of skin. Legend has it that the mythical "Blobby" is a passive, benign being who harmlessly wanders around deserted graveyards, temples and villages. What is truly offensive though is the smell of the Nuppeppo: said to be body odour worse than the stench of rotting flesh (some believe that the Nuppeppo is decaying flesh). Despite its odious nature, eternal youth allegedly awaits those who eat the skin of the lumpy spook and, altogether, it's hard not to find the 'the Blob' of Japanese legend just a little appealing. It's a moving mass of flesh! Brilliant!
Posted by James Clayton at 2/20/2010 07:17:00 PM