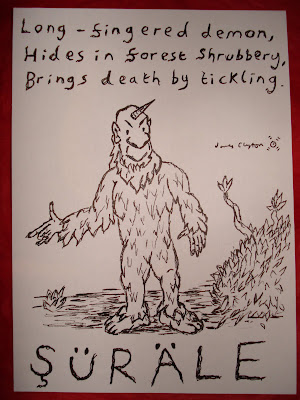 With a horn sticking out of its forehead and an excellent accented name, the Şüräle (said like "sure, I lay") is a striking forest monster from Tatar mythology. Understood to be have a woolly or furry body and exceptionally long fingers, legend has it that the folklore figure lurks in the trees waiting for lost wanderers to pass its way. Having successfully grabbed its victim or lured them into a thicket, the Şüräle then proceeds to tickle the poor person to death. It probably isn't funny perishing at the fingertips of the furry monster, but it goes down as a popular beast that's drawn upon in Tatar cautionary tales time and time again. The first Tatar ballet was about a Şüräle and the most popular poem written by Ğabdulla Tuqay (dubbed the 'Father of Tatar literature') has the forest demon getting his digits trapped in a tree having been tricked by a young man. Altogether, it's an entity of immense importance in ethnic tradition and Asiatic culture altogether, coming across as a creature that captures the imagination. Even though it wouldn't do to play the tickling game with the woolly demon of the woods, you can't deny that the unicorn horn, double-whammy of umlauts and eccentric killing method makes the Şüräle an appealing mythical beastie.
Posted by James Clayton at 2/01/2010 04:36:00 PM