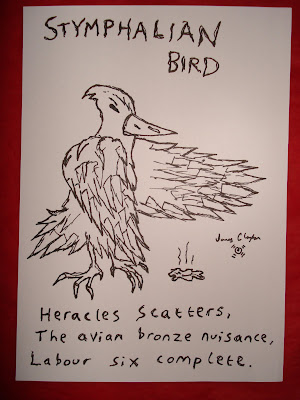 The Stymphalian Birds were large flying creatures with beaks of bronze and metal-tipped feathers that could they could fire at enemies. They are also said to have toxic dung, may have been man-eaters depending on who you believe and the myth goes that they irritated the locals around Lake Stymphalia on the Peloponnese peninsula following a mass migration. Heracles was summoned, for his sixth labour out of the twelve, got rid of them by scaring them out of the trees with the noise of a bronze rattle (probably shooting them down with bow and arrow before the winged ones had chance to launch their lethal feathers at him). This isn't really fair seeing as the Stymphalian may not actully have been vicious beasties but actually harmless refugees who only came to the woods around Stymphalia because they'd fled from some wolves. It's also sad that whereas Heracles is hailed as a legendary cultural hero, the closest we get to a cultural depiction of the metallic avians is probably the irritating mecha-owl Bubo in Clash of the Titans. The day will come for the bronze ones, and retribution will arrive on beating metal wings...
Posted by James Clayton at 12/04/2009 11:26:00 AM