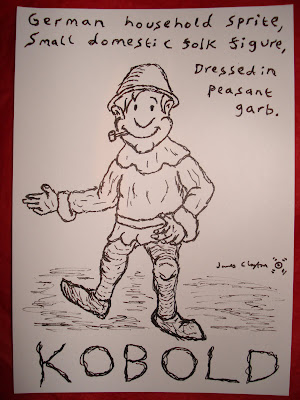 A legendary little race of beings with many local variations and divergent traditions, Kobolds are German fun folklore beings whose mythical roots date back to the Middle Ages. Usually configured as monstrous dog-troll terrors in Dungeons & Dragons realms, the traditional Kobold of legend is said to be a humanoid figures no taller than a few feet high. What they look like depends on where they dwell: there are hunched-up mine Kobolds, sailor-suit-wearing and pipe-smoking ship Kobolds and - most prominent - household Kobolds. The domesticated little spirits are understood to do chores or make mischief depending on how they're treated and characteristically wear peasant clothing. Popular fairyfolk that they are, stories of Kobolds include the Heinzelmännchen of Köln (they used to do all the work in the town) and the Hödekin of Hildeheim (felt-hat wearing friend of the local bishop). In a way it's a shame their reputation has been uglified by role-playing in recent years, and the Mainzelmännchen who appear in the ZDF TV channel idents are much closer in spirit to the old-fashioned folklore figuration of the imagination-capturing Kobold. The tiny people of German legend deserve our tribute and praise.
Posted by James Clayton at 2/15/2010 04:20:00 PM