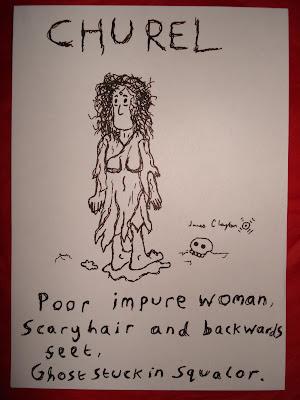 Unlucky is the impoverished Indian woman who dies during a period of 'ritual impurity'. Hindu mythology has it that low-caste females unfortunate enough to pass away whilst giving birth or going through 'that time of the month' become Churel: saggy-breasted, bedraggled ghosts with backwards feet and no mouth. Doomed to hang around graveyards or squalid places until a successful exorcism is performed, Churel are also said to seek to capture young men, possibly to suck their blood. They've been condemned to a really crummy afterlife because of poor time-keeping, poverty and the simple fact that they are women. Surely death should not be so discriminatory.
Posted by James Clayton at 12/13/2009 12:24:00 PM